The Right Side of the Analytics Revolution Begins with Underwriting

The Right Side of the Analytics Revolution Begins with Underwriting 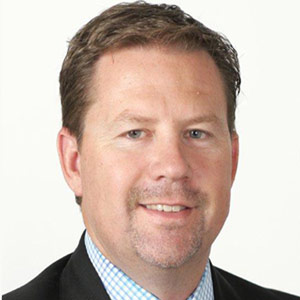 As the adoption of data and predictive analytics continues to grow in property/casualty (P&C) insurance, so does the segmentation and sophistication of the market. As a result, there is an increasing disparity between carriers with a competitive edge and those without it. According to a recent Towers Watson survey on property/casualty insurers, 87 percent of P&C insurers are seeing profitability with use of predictive models. As a result, many of their competitors are now being adversely selected—whether intentionally or not. Adverse selection occurs when an insurer is able to locate and price the best risks at a more desirable rate than the competition, while avoiding poor performing risks at insufficient prices. Every carrier faces adverse selection, and those experiencing it are often blindsided by its devastating effect on their portfolio.

A handful of data-driven carriers actively use predictive analytics to offensively penetrate new market opportunities from their unsuspecting competition, most of whom are still reliant on outdated legacy systems. On the opposite end of the spectrum, an equally small crowd knows they are the unwilling victims of adverse selection, as competitors currently replace their poorly performing accounts with the best long-term business. However, the overwhelming majority of the market doesn’t even realize that all of their best business is being taken from them, until after the fact.

How to Pinpoint Adverse Selection

In order for a carrier to protect their business from adverse selection, they must first find out if they’re affected by it. There are three main indicators that your company is susceptible to being adversely selected. An early warning sign is ‘climbing loss ratios and loss costs’. If a carrier frequently blames market conditions and the irrational pricing of risk by competitors, this could be a sign that the competition has better data to accurately price a specific risk.

The second indicator is if a carrier’s rates go up but their volume declines. If an actuary finds that manual rates aren’t able to cover the expected future cost, their business is stuck in a losing situation: raising rates puts policy retention at risk, but failing to raise rates cuts into profitability. For this reason, it is no surprise that the aforementioned Towers Watson survey found that more than half of the participants said predictive modeling helped with policy retention.

The third and last indicator is when reserves become inadequate. When actuaries show signs of mild reserve inadequacy, the claims department often argues that while reserving practices are the same, loss frequency and severity have increased. This forces insurers to downsize and focus on a niche specialization in order to survive, while also diminishing possible future growth—a very precarious situation for any insurer to be in. The fundamental problem with this is that the insurer cannot identify and price risk with the accuracy that their competitors can. 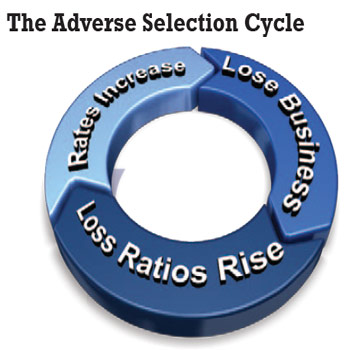 Underwriting is the best, most proactive place to begin in order to mitigate the possibility of adverse selection. Small to mid-sized carriers traditionally relied on their own sets of data in order to price risks, but as third-party vendors offer data consortiums loaded with risk information from millions of policies, these carriers can now afford analytically driven underwriting practices that help prevent sample bias. Sample bias (otherwise known as selection bias) occurs when a carrier makes decisions on a limited set of their own data that is biased by their risk appetite, underwriting guidelines, and growth and retention strategies. Insurers, who are missing this critical risk information that their competitors may have on hand, are putting themselves at risk of pricing business inadequately and losing out on the best longterm business.

An underwriter’s own experience and knowledge base is bolstered by having access to large quantities of this granular data that they can use to not only assess risk more accurately, but to target the best business and price it accurately. It also helps underwriters steer clear of ‘bad’ business, which is just as important. To put it into context, data is useless without human knowledge, but it is also important to remember that human judgment is fallible.

Numerous studies from behavioral scientists and psychologists such as Nobel Prize winner Daniel Kahneman, have shown that human decision making for financial decisions is often flawed. These studies have found that predictive analytics consistently help in making better-informed decisions rather than relying on human judgment alone. The best outcomes are found in combining predictive analytics with human judgment, and using predictive models as a vital tool to assist underwriters in making the best decisions. As the use of predictive modeling in underwriting becomes a ‘new normal’ in insurance, those who are not invested in these technologies will continue to lose their competitive edge, for which adverse selection acts as a grim proof point. The key to avoiding adverse selection lies in making the necessary transition to an analyticallydriven organization. By utilizing large sets of data available, insurers can achieve the pricing precision needed to stay ahead of the competition. While the benefits of using the latest analytical tools are huge, it is important to note that remaining stagnant in traditional business practices is equally detrimental. The competition is fierce, and it’s imperative to ensure your business is on the right side of the analytics revolution.

How Cloud and AI Are Driving Forward Customer Engagement and Service...

For a Smarter City: Trust the Data, Ignore the Hype

Your website is the face of your company and is the most important...